I’m not big on sending my files over the internet to random websites – but the boys over at Media Convert have done a sterling job to create a 1-stop file conversion site.

I was struggling to find a program that would convert an OpenOffice Draw file (.odg) into something easily read on Windows. Eventually I settled on converting it to a PNG.

The process was painless. Upload the file, wait a few moments, and then download the converion.

The site even does music and video formats, as well as a raft of others.

Today, I had to setup an Oki C5650 on a network, and find out how many pages had passed through it due to an surprisingly quick turnaround in toner. I was struggling to find the default admin password for the web interface as it wasn’t in the online manual.

Knowling that searching the internet is much better than my library abilities, I managed to find the password at Art of Hacking. In true form, there’s a very useful page that has user collected default passwords for thousands of devices. And in true hacking form, it’s called etc/passwd.

I upgraded to Ubuntu 8.04 Hardy Heron over the weekend. The process was relatively painless, and some of the upgrades made little, but nice, improvements.

Finally, the UPNP media rendering functionality in Rhythmbox is working!

To set this up, you need to access the command line, and install the pyhton-coherence package:

Once installed, fire up Rhythmbox, and click on Edit > Plugins.

Once there, tick the box for DLNA/UPnP to enable UPnP.

Click Close and you should see a new shared tab on the left, which will list your network UPnP servers.

It’s somewhat limited in that it doesn’t present you with the various folder views that other media renderers will – but at least you can pick out music from network devices. 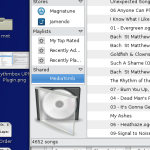 The Beeb have made it possible for Wii users to watch streaming video with the iPlayer.

Right now, UK Wii owners who use the Internet Channel (£3.50 to you squire) can visit the iPlayer website and watch TV right now.

There are also hints that an iPlayer channel for the Wii will be available some time in the future (hopefully for free, but likely to be bundled with the Internet Channel).

This is great for that media convergent home. Ironically, the Wii is the console least likely to be touted as a multimedia center – and yet it’s the first of the current generation of consoles to be able to play the content.

Word is that the Playstation 3 will not be far behind – but Microsoft’s XBox360 will be unlikely to take part unless a deal can be made between MS and BBC.

I think that if the iPlayer Channel does manifest itself – I’ll be spending much more time on the Wii. Potentially, this could knock out a whole load of the Sky+ box’s usefulness along with it.

It seems that this is old news generally, but I found Mario Paint Composer on the Internet yesterday. It was actually due to a YouTube video (why the hell I ended up looking at a Rick Astley song I still don’t know).

Of course, there is not one but two composer programs emulating the features of Mario Paint. The other is Mario Sequencer, which was originally written in Japanese. Luckily the website hosts an English version.

I’ve found that sequencer seems to have better timing, but Composer has a slightly nicer interface.

I was musing on being able to use this in schools as a basic synthesizer for primary kids. It has everything they need, such as tempo and different sounds. Most importantly, the sounds are fun and absurd.

I’m currently working on my Mario Paint version of ‘Faithealer’…

So, Vista’s been out for a while now – some people think it’s great (usually they are selling it), some think that it’s pants.

Now, I’m not far from the front of the queue when it comes to raving about Linux. Ubuntu was the second Linux distro that I have tried, and I’ve stuck with it quite happily. In fact, things have remained pretty good from my initial post about my first experiences with Ubuntu.

On the other hand, Windows has it’s own place in the world. If you’re a person who can afford Microsoft’s astronomical licensing costs – then Microsoft can offer you some great things too.

Unfortunately, I don’t feel that Windows Vista is one of those great things.

The thing that strikes me whenever I use Vista is that it is so slow. Not just slow, but slooooooow. I have to use a variety of systems, and when I need to fix somebody’s laptop that is running Vista I should be putting an afternoon aside.

This isn’t entirely Microsoft’s fault. Consumer greed, business greed and the general desire to get more for less has also led to this rocky road to Hell. Computers and notebooks are generally sold cheap. Cheap means under-spec. Even up to the end of Windows XP’s golden lifespan (I’m not saying it’s past it, by the way), computer manufacturers were selling new systems with 256MB RAM. I’m sorry, but I’ve used Windows XP enough to know that as soon as you put on Service Pack 2, some anti-virus software, maybe some anti-malware package and then decide to run a few applications – time begins to speed up around you. Either that or the computer is running slowly. You decide.

Now Vista has mammoth requirements for what is essentially a core program. The minimum amount of RAM to run Vista is 512MB. That’s what I say is minimum for XP nowadays. I recommend having more than 1GB RAM installed for a pleasant Vista experience.

The problem is, noteboook manufacturers might even stump up the extra £5 to put 1GB of RAM in – but when 256MB of RAM is then being stolen by the onboard graphics so that you can see the Aero effects, things are clearly still not right.

Vista will run well on a decent, modern computer system. The problem is that Joe Public will be sold some tat from PC World by a part-time A-level student who will bestow Vista’s Flip-3D as a major selling point. Oh, it can burn DVDs as well.

When real-life steps in, this is unsuitable for a lot of computers. Microsoft wants business to be using its latest baby, but on any existing hardware – Vista just doesn’t make the crunch.

My computer is almost 4 years old and runs Ubuntu beautifully. I have 1GB which more than meets any application requirements. In fact, this only becomes a problem when I run Windows XP in a virtual machine. Ironically, XP demands more memory running a few apps than the operating system that it is running on! And Ubuntu has a barrel more services, a 3D desktop, and (when I’m using it), about 10-15 application windows open!

So I’m dual-booting into Vista at the moment. I do this when I fancy a game of Command and Conquer Generals with my brother over the internet. I often say, “I’ll just boot into Windows – give me 15 minutes.” Usually by the end of that time Windows may have finished messing around with updates, defragging, loading unneccesary services and generally being slow (on a 2.4GHz P4 with 1GB RAM), before I feel that I can get the thing to behave and run reasonably well.

I’ve been stung enough times when Vista decides that the ideal time to start defragging my hard disk drive and running an anti-spyware scan is during the middle of a game.

When I was using the Beta versions of Vista, it was slow – but I figured that it was due to being a Beta. There was a clear effort from Redmond to meet Vista’s release date and there was a buzz. Vista naysayers were told to wait for the RTM (release to manufacturing) version. But overall, the performance wasn’t a great deal better in the RTM version.

Service Pack 1 was a glimmer of hope. Some performance increases and a rollup of some updates that fix what I can only describe as stupid problems that should never have been in the RTM version (such as having to Activate Windows after it has already been activated).

I thought I’d give this a try on my system. Guess what? It didn’t install. I wasn’t surprised. The update need prerequisites installed, and othr bits and bobs. I’d already had difficulty getting these installed on other computers, so I have a grave thought that it would mess up my system.

It didn’t install – but at least it didn’t wreck my system. Microsoft’s answer is to just keep trying until it works. Umm, I don’t have hours to piss away waiting for my work computer to continuously fail to install an update that takes around an hour to work out if it wants to install or now.

So, I gave up after attempt 3 or 4. I tried installing manually from the downloads. It’s not right. Vista feels inherently broken.

So it’s time to upgrade to XP. It’s a joke I’ve seen floating around the internet for a while now, but it’s exactly how I’m feeling. I’m going to dual-boot into XP for playing games. It can run fast, and doesn’t have some of the hardware quirks that I’m still experiencing with Vista.

Over time, my disappointment with Vista has settled. It’s OK – but it’s extremely lacking in key areas. And these key areas tip the boat for me.

I’m just thankful that I run a Linux O/S as my main home operating system. I know it’s stable. I know it will behave itself most of the time. It’s still frustrating to use occasionally, but these times of frustration occur much less than when I use Vista.